Here are a few things you may have heard about the Central Park:

←It’s THE PARK of planned parks. Also, no other park in the world is as well-recognized as this one.

←Tourists flock to this park like bees to honey. And why not? The park is a treasure trove of fun activities, horse-drawn carriage rides, ball-fields, a zoo, carousel, boating and much more.

←ICE SKATING in winter! Because who doesn’t want to step out onto an ice rink surrounded by a scenic backdrop of skyscrapers, wrapped in toasty-warm clothing, to show of skating skills or simply to have fun? Everyone!

And here are the things you don’t know about the Central Park: seven interesting, cool, and/or otherwise strange facts:

From the very first film-adaptation of Shakespeare’s popular play Romeo and Juliet in 1908, to the various episodes of Law & Order, Central Park has played a role in over three hundred films—including Academy-Award winners—and numerous TV shows, video games, songs, photographs, artwork and books.

That is why this grand landmark is also titled the most-filmed public park worldwide!

…because it was once filled with sheep! Up until 1934, 200 sheep once served to trim and fertilize the lawns of this nearly 15-acre section of Central Park; their presence adding to the quiet natural vibe, of the park. 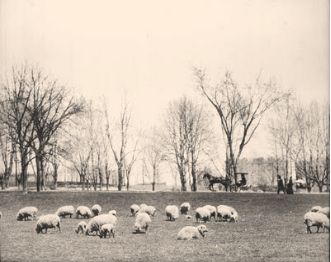 At day’s end, the sheep were herded by a shepherd, to a nearby “sheep pen”. If you have visited or plan on visiting the popular Tavern on the Green, know that this was the former location of that pen.

An crocodile once decided to take some laps…

Back in 2001, visitors at Central Park enjoying their time near the Harlem Meer got quite the shock when they spotted a crocodile in one of the lakes. Don’t worry; this member of the crocodilian family did not hurt anyone, except maybe put up quite a fight against the croc wrestlers who were called in to extract it. Sources suggest that the croc was likely smuggled inside and set free.

Since then, the park has been crocodile-free. You can take your tour in peace and safety.

Building the park was anything but easy…

The nooks and crevices of the park that are loved by the locals and tourists are actually primarily man-made.

Roughly 2.5 million cubic yards of stone and dirt was used in construction and landscaping. That’s enough earth to add 80 stories to a typical football field!

Oh, and the construction workers used gunpowder to blast solid bedrock outcroppings The lanes walked by thousands today definitely did not happen by magic, but rather by hard work and creativity.

Central Park is home to over 230 species of birds and offers some of the best birding in the entire USA!

Located in the path of the Atlantic Flyway, a bird migratory route, Central Park is filled with many year-round and migrating birds including Eastern Screech Owls, red-tailed hawks, egrets, American kestrels, bluebirds, robins, woodcocks, and according to the Audubon Society, even an occasional bald eagle has been spotted in the park! 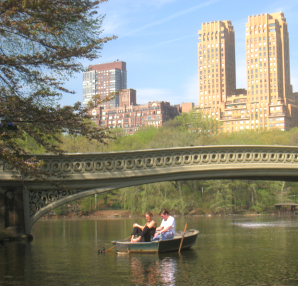 If you’d like to have a try at birding, you can borrow a no cost, kid-friendly Discovery Kit from any one of Central Park’s Visitor Centers, complete with binoculars, a guidebook, maps and even sketching materials!

Yes, you read that right. Pay $10k, and you can adopt your very own bench in Central Park. People have been adopting these for various purposes: to leave their mark in Central Park, as extravagant birthday, anniversary or retirement gifts, and more.

Lost? Let the lights guide you…

If you ever find yourself lost in Central Park with a lost phone or dead battery, turn to the lamp posts for help. All 1600 cast-iron lampposts in the park are numbered, and these numbers can tell you which part of the park you are in.

For instance, if you’re lost near a lamppost numbered “8316”, it means that you are near East 83rd St. Use the first two numbers to identify the street, and the next two numbers to know how far east or west you’ve travelled, with even numbers indicating East and odd numbers indicating West. Newer lampposts actually contain the letters “E” and “W” to define directions.

Cool, huh? The city’s got your back!

Want to learn more incredible things about the Central Park, or better yet, see them in person? Book a unique sightseeing tour of Central Park with My NY Tours today!